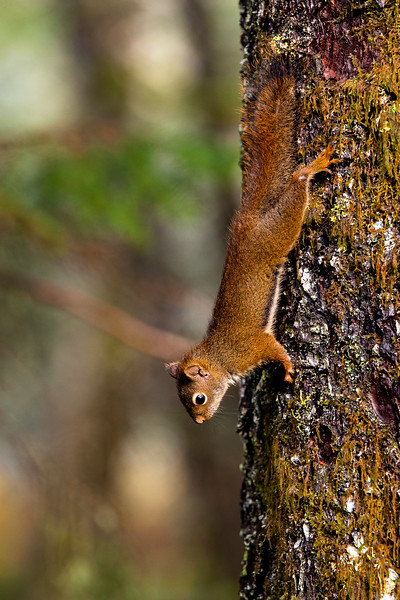 Red Squirrels are sadly a rare sight in the UK, as the 2 million Grey Squirrels have pushed back they population numbers to just 140,000. They're smaller and more agile than the grey squirrels... and tend to be harder to photograph, unless they're habituated to humans.

In Canada however, the Red Squirrels are almost as numerous as the greys - and are found mostly in the Northern forests. That is where I photographed this beautiful individual, as it clambered quickly down the trunk of a large pine tree.

So how do you tell the difference between the two types of Red Squirrel?

Aside from the obvious fact that one species is found in the Americas and the other in Eurasia, there are also physical differences between the two. The Eurasian Red Squirrels are almost pure red with a white front, whereas the American equivalent can vary from orange-brown to rusty-red with a lighter front and sometimes have a darker stripe down their side. The Eurasian Red Squirrels also have distinctive tufts at the ends of their ears, unlike their American cousins.

How Did You Shoot That?